The Town of Danby in New York

We didn’t make our self-imposed deadline of year’s end, but the Town Board unanimously passed the zoning update at the first meeting of the new year on January 4. What was passed does not include the transfer of development rights component because that will first need a generic environmental impact study and findings. I expect that to be done in the next couple of months, whereupon the TDR will be taken up by the Town Board. Passage and inclusion in our zoning law is not assured. The GEIS is important, as is the expressed opinion of the public.

There is a lot that is new and different in the new zoning law.  The Planning Board will be on the front lines of the approval process for applications under the new rules. The January meeting of the PB focused on David West, our Town Planner, conducting something of a tutorial to get the group up to speed.

The adopted zoning is here: http://danby.ny.gov/docs/ll1-2022-zoning

Governor Hochul signed into law the authorization, passed in both the Assembly and Senate, allowing Danby to reduce the taxes on land protected by conservation easements. We sought this enabling legislation because in its absence land is mandated by the state to be assessed at market value. While some can afford the taxes, for some the cost is a driver to subdivide and sell. This pressure from taxes was called out in the very first meeting of the Planning Group two years ago and resulted in a working group being formed that focused on how to get tax relief for those in need – who are primarily large landowners. The group coalesced around a proposal, discovered when researching options, to seek state authorization to do what 4 towns in New York State had already done, using a Department of Environmental Conservation template – which is to reduce taxes on land protected by conservation easements. The model law provides for temporary easements, with the amount of the abatement tied to the length of the easement term as well as for the permanent easements we were already doing here in Danby. The fact that we already have a conservation easement program in Danby, administered by the Conservation Advisory Council, put us in a good position to take on the work the law would enable.

Now that we have been given the authorization, we need to pass a local law to implement it. At the January 4 TB meeting, the CAC was charged with working with our Town Planner to propose how this will work in Danby. A committee of the CAC was created at the January 11 meeting and has already met to kick-start this effort.

There are many questions that need to be addressed. Do we have to adhere strictly to the provisions in the enabling legislation, or can we do something less? “Less” could be having fewer categories of abatement (the legislative authorization has 4) or granting less of a reduction (the committee agrees that the difference between a permanent easement’s reduction of 90% and the 85% for a 50-75 year commitment is smaller than desired). No point in even thinking about it if we have to implement exactly as written. It is already clear that the town can pick and choose which properties are allowed to participate based on the perceived public benefit, so developing criteria for making those judgments will certainly figure in. The Town Attorney is being consulted to understand what can and cannot be done.

Another consideration is the participation of other taxing entities within the town. The enabling legislation allows for school districts to also exempt from school taxes participating properties. Ditto for the fire district and the county. These additional taxing districts have generally agreed to opt into the program in the other towns that have adopted this approach. Opting in would be revenue-neutral for them, not affecting their budgets or the amount of taxes they can levy. It will reduce the tax base from which the taxes are raised, though, so that the remaining properties in the taxing jurisdiction will have to make up the difference. The additional cost would be small. How small? That is another question the committee will investigate. A meeting with Jay Franklin, the head of the Tompkins County Assessment Department, is another early step for this committee.

As I mentioned last month, the town has contracted to have the town surveyed to determine who has access to wired internet and who does not. The results are expected in February and will inform our strategy for how to address unmet need. Some measure of public subsidy of line extensions is likely to follow. Funding will, of course, be an issue. The good news is that there is now broad agreement that universal high-speed internet access is a modern-day necessity, even for very rural residents. State and Federal money is increasingly being made available. The need and cost of extending service to everyone is huge, though, and our ability to compete for funding is enhanced by documenting how existing service is inadequate. You can help by participating in a survey being conducted by the New York State ConnectALL Office (CAO). The brief survey enables you to report your actual on-the-ground broadband availability and experience, which may help direct future funding. All are encouraged to participate, even if you already have some degree of internet service. If you have access to the web, visit New York State Broadband Assessment Project for info on how to participate in the survey. If you don’t have access or would rather fill out a paper survey, call 1-855-692-2627.

Tod Sukontarak, the principal operator of the West Danby Water District, has stepped down from that position and Scott Wendt, the assistant operator, has taken over the lead position. Tod is now the assistant. Because he intends to travel in his retirement, he will be away for weeks at a time, leaving only one operator available. We need another operator for back-up, someone who will replace Tod as he transitions into full retirement. Might that be you?

We have been lucky to have had West Danby residents willing to serve as operators so far in the life of the district, and the ideal person to fill the need would be available on quick notice. That means they need to live or work nearby and be willing and able to drop whatever else they are doing to deal with a sudden need (like a water line break or critical system component failure). They need not be a district resident, but they will need to either already have the needed training in system operation or be willing to take the training to be certified. The district will pay for the training, if it is needed. The required apprenticeship can also be satisfied by working with the operators. This is a very part-time salaried position ($3932/year) that carries a lot of responsibility. If you are interested, give me a call (607 227-4440).

We did not opt out of Cannabis

The Town Board put forth a local law to opt out of cannabis consumption sites so that the public could speak to the question at the associated public hearing. There was very little comment from the public, though. A motion to vote on the law failed for want of a second, so we are opting in to both the possibility of sales and consumption. This despite the lack of relevant information from the state about what either sales or consumption sites would look like or how they would function. We will still have some measure of control for either of these should they be proposed for Danby, given the requirements of our Zoning Law.

Along with the loader, our plow/dump trucks are key pieces of equipment for the Highway Department. We have 3 trucks that are becoming expensive to maintain at 10 years. While we take good care of them, salt is even harder on them than it is on your car or truck. The Town Board committed to buying 3 new trucks (at $250,000 each!). The delivery time for these vehicles is even more stretched than for autos. We don’t expect that they can be delivered for at least 18 months (which is when we really want them). By ordering now we locked in the current price. We will pay for them in installments. Because the trucks being replaced will not be junk yard ready, we can get some of the needed funds by auctioning them off, and since they will be paid off, we have the money that we have been putting in the budget for their installment purchase to apply to the new trucks. There will be more needed, of course, but we can plan ahead and budget for it. The result will be an increase if the tax levy, but not a big increase in one year. 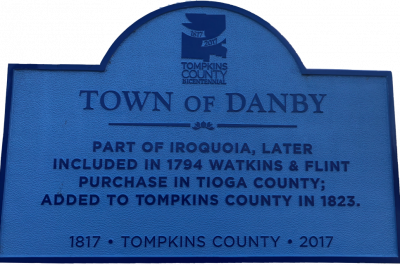 The Town of Danby sits on the traditional & ancestral land of the Gayogoho:no’ (Cayuga Nation), one of the five nations to first form the Haudenosaunee. Indigenous peoples were largely forced out of Upstate New York by the Sullivan-Clinton Expedition in 1779. The land that would become the Town of Danby was a part of the Watkins and Flint Purchase, a 336,380 acre patent granted by New York State to numerous eastern investors in 1794.